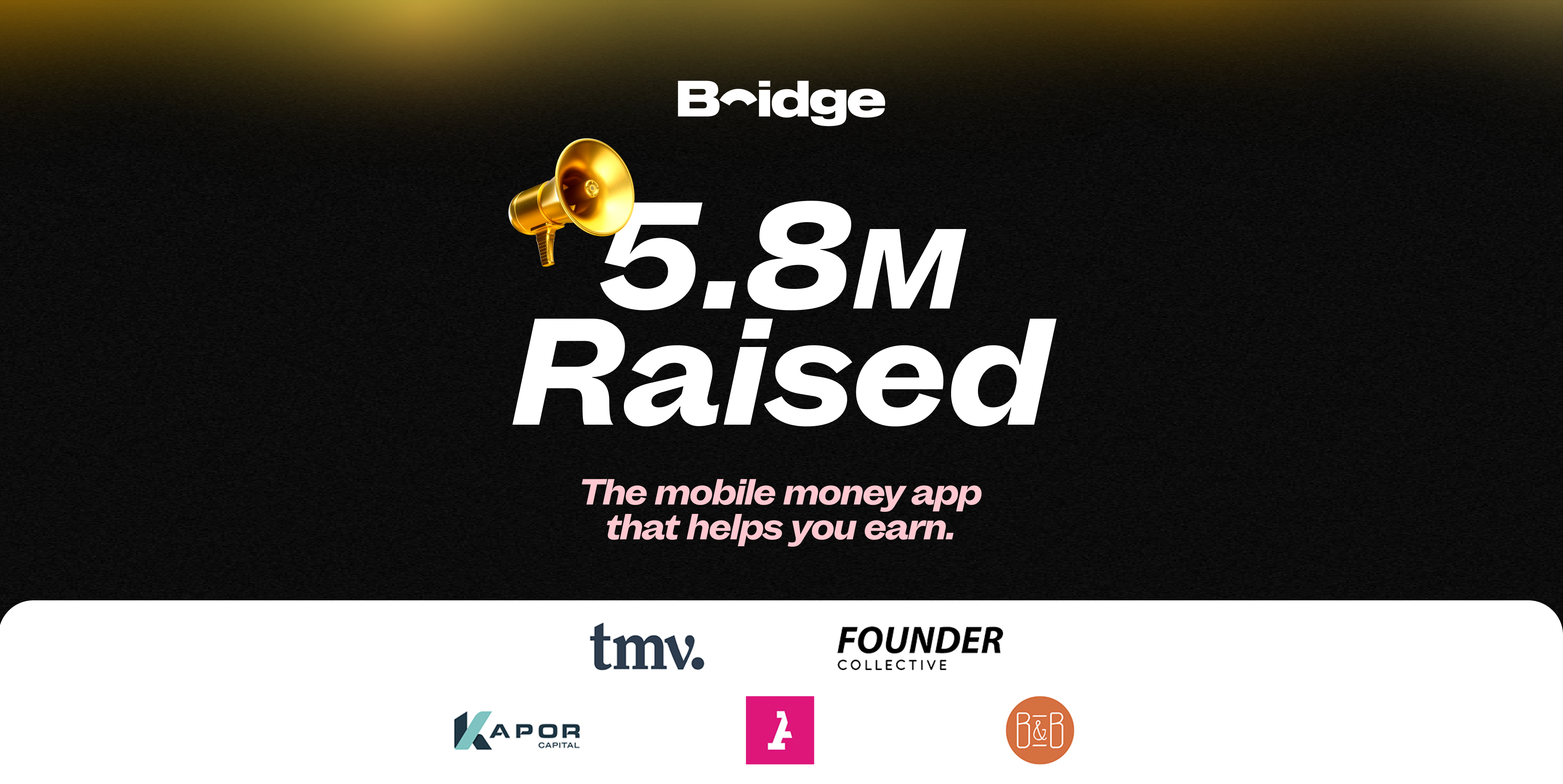 Since our founding in 2019, our co-founders Lalit and David have dedicated themselves to solving the root financial problem for 100 million Americans: a simple lack of money. A cheaper credit card, a better interest rate, or receipt-driven cash back at a smattering of franchise stores can only do so much when a person’s income is limited.

Lalit had left his career at Citigroup and moved to Chicago, and after six months spent researching the best solution, our CEO’s next step was obvious. Bridge was dreamed up to “boost the asset side of the ledger,” and we can now announce we’ve raised $5.8 million in seed funding, led by early-stage venture firm TMV, to bring this dream to life. Bridge’s seed round includes several top investors, including Founder Collective, Kapor Capital, Acumen America, Bread & Butter Ventures, Revolution’s Rise of the Rest Seed Fund, Plug and Play Ventures, Basecamp Fund and Ulu Ventures.

In addition to our fundraising announcement, our CEO was proud to share his story with Axios Pro today, and it’s probably not what you’d expect. Raised by his Indian immigrant parents in Atlanta, Lalit grew up lower middle-class, raised to honor hard work, pinch pennies, and follow the American dream. But after “making it,” becoming a successful trader managing $200M at Citigroup, he knew he wanted to make an impact.

We’ve been proud to focus on feature additions that empower members to make more money. Everything from getting members paid to voluntarily view ads, taking surveys, winning no-fee/no-loss raffles, referring friends to earn Royalties, to offering a best-in-class debit card (powered by Unit and VISA) for those who aren’t satisfied with their current bank. We’re also awarding next day cash back on any purchase made from a linked credit or debit card.

We won’t stop until we’ve built the best marketplace for no-gimmick money making opportunities to help you get ahead.

Sign up for our newsletter, press enter to submit.
Done!
Oops! Something went wrong while submitting the form.

Bridge is a financial technology company and is not a bank. Banking services provided by Blue Ridge Bank N.A., Member FDIC. The Bridge Money Visa® Debit Card is issued by Blue Ridge Bank N.A. pursuant to a license from Visa U.S.A. Inc. and may be used everywhere Visa debit cards are accepted. Apple, the Apple logo, and iPhone are trademarks of Apple Inc. App Store is a service mark of Apple Inc. Google, Android and Google Play are trademarks of Google Inc.